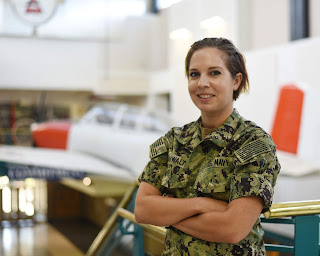 Daywalt credits success in the Navy with lessons learned growing up in Annapolis.

“I learned to understand different people’s upbringing and learn from them,” Daywalt said. “We’re all the same no matter where we grew up.”

NAS Pensacola, “The Cradle of Naval Aviation” is best known as the initial primary training base for all U.S. Navy, Marine Corps and Coast Guard officers pursuing designations as Naval Aviators and Naval Flight Officers.

Once these service members finish training they are deployed around the world putting their skill set to work flying jets from aircraft carriers, submarine-hunting helicopters, serving as aircrew operating sophisticated radar and weapons systems, electronic warfare and more. Operating on land, air, or sea, they represent the best of operational and training support.

Pensacola is home to the world-renowned Blue Angels Flight Demonstration Squadron and boast an overall workforce of 16,000 military and 7,400 civilian personnel.

“As sailors forged by the sea, we will continue to be the Navy the nation needs,” said Capt. Maxine Goodridge, Commanding Officer Naval Air Technical Training Center. “Providing high velocity learning at every level is what we do best.”

Planes cannot fly without the highest quality and best-trained aircraft technicians to support naval operations around the world. NATTC provides four major departments; Air Traffic Control, Avionics, Air Training and Mechanical Training for nearly all enlisted aircraft maintenance and enlisted aircrew specialties. NATTC is turning out a viable product. Sailors and Marines who move on to fleet duty arrive prepared and motivated. Their training must continue “on the job” as they become acclimated to a particular aircraft in a particular squadron, be it a carrier-based F-14 Tomcat unit, a land-based P-3C Orion squadron or an SH-60 Seahawk detachment operating from a cruiser.

NATTC was commissioned in 1943 and today, the training center is 5,300 strong including students, instructors and support personnel.

The largest part of the student body is comprised of sailors attending their first technical training schools where they learn knowledge and skills required to perform as technicians at the 3rd class petty officer level, similar to a civilian apprentice. Advanced technical schools provide higher-level technical knowledge for senior petty officers, who serve as front-line supervisors, and in similar roles as civilian journeyman. NATTC also conducts technical training for Naval officers, who supervise enlisted personnel.

With a cousin in the U.S. Army, Daywalt has military ties with family members who have previously served and is honored to carry on the family tradition.

More than 15,000 Navy and Marine Corps students graduate from NATTC each year illustrating how their existing programs fit into their philosophy of completing the mission with well-trained, well-led and motivated personnel, according to Navy officials.

As a member of one of the U.S. Navy’s most relied-upon assets, Daywalt and other sailors know they are part of a legacy that will last beyond their lifetimes providing the Navy the nation needs.

“Being in the Navy is something I always wanted to do, so I can say that I served my country,” Daywalt added.